I was busy with the scissors when I held a paper cut workshop at the Museum of Danish America in Elk Horn, USA. I was at the museum for over two days. Almost 400 visitors came to the museum and many of them grabbed the scissors.

I also showed the exhibition “The Sound of the Scissors Paper People” at the Museum of Danish America. The exhibition, which I have developed together with sound artist Robert Cole Rizzi and photographer Karen Relster, combines paper cuts, sound, text, and photography. The exhibition was shown for the first time in Tokyo in 2017.

The Museum of Danish America is located in Iowa in the Midwest, which is an area of ​​the United States where many Danish emigrants have settled through the ages. The museum has a strong focus on maintaining Danish culture, including Danish paper cuts.

Elk Horn was founded by Danish emigrants in 1901. Today the town has approx. 600 inhabitants of primarily Danish origin. Precisely for this reason, the city is often referred to as “Denmark on the prairie”. The museum works continuously to preserve the Danish immigrants in the history and culture of the United States. But the museum also has a focus on being a part of the present. This is done through social, cultural, and artistic activities, of which my exhibition is just one example.

See photos from my paper cut workshops at Museum of Danish America on my Facebook page.

Read more about my paper cut workshops both online and physical workshops.

Thanks to Aslaug and Carl Friis’s Legat and Grosserer L. F. Foghts Fond for donations that made this project possible. 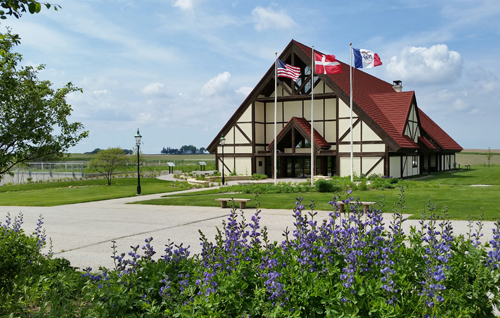