Workshops in Duluth, Minnesota, USA – and a very large lake!

In April 2017, I was in Duluth, Minnesota to exhibit and do paper cut workshops at The Nordic Center. In the photo, I have just got ready for the opening of the exhibition.

The second day in Duluth featured two paper cut sessions at the University of Minnesota Duluth, a hockey match and a lute concert in the evening 🙂

On the third day, I did another session at the university and finally my workshop at The Nordic Center.

The workshop was announced at 3 pm where only 9 people had showed up! I had to start my little introduction, with this small audience. I was reasonably happy at 3:10 pm when 35 had appeared and the room was full 🙂

See photos from the workshop at The Nordic Center on my Facebook page.

I also got to see some of Duluth and the giant Lake Superior, which I had been looking very much forward to seeing. I think it is the world’s largest lake and in some places, it is 600 meters deep. Years ago there was reportedly a species of sturgeon in the lake, that could grow up to two meters long!

See photos from the excursion to Lake Superior on my Facebook page. 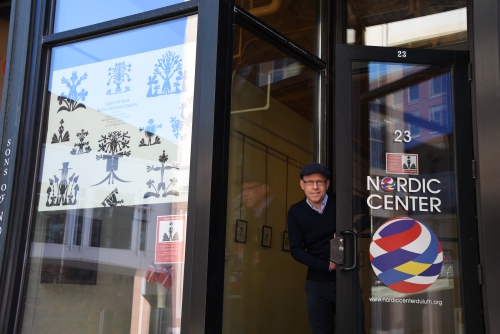